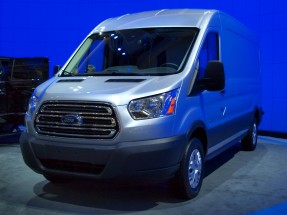 Vans are officially driving the commercial vehicle sector, especially in terms of conversions, but as the growth in van numbers continues into 2017 it is heavy goods vehicles (HGVs) that are being left behind.

According to research collated by Transport for London’s Roads Task Force, there is evidence that vans are being used as substitutes for HGVs, and this trend isn’t just affecting the capital. This record number of vans has been seen throughout the UK and limited HGV use is also mirrored but why are commercial business owners and fleet managers choosing to go down this route? Here we explore this burgeoning trend and reveal what this could mean for the future of HGVs.

The statistics behind the trend

Earlier this year the Society of Motor Manufacturers and Traders (SMMT) revealed that the number of vans on British roads is the biggest ever to be recorded and as of April 2016, there was just over 4 million vans being driven on UK roads. The figures document an increase of 4.3% in comparison to 2015 and as business confidence and growth continues these numbers are expected to increase further year-on-year.

Van manufacturers have taken advantage of this trend of rising numbers too and at the UK commercial vehicle sector’s much anticipated annual exhibition, Commercial Vehicle Show, there were a record number of new van and pickup models showcased as manufacturers look to capitalise on this van use explosion. In stark comparison, whilst the domestic freight activity showed a slight increase, international freight activity and HGV usage declined from April 2015 to March 2016 in accordance with the Department for Transport’s findings. Overall there were 8% less goods lifted and 6% less goods moved.

Why the big change?

Several reasons have been attributed to the strength of van sales and the decline of HGV use on UK roads. There is less regulations affecting van drivers compared with HGV operators, regulations that can mean an unlimited amount of paperwork for fleet operators. Even speed limit changes that should have tipped the balance towards HGV use have had the opposite effect with the aftermath of HGV speed limit increases on rural roads, as introduced last April, making lorry journeys slower than ever.

Fleet managers and commercial business owners may also be favouring the use of vans due to fewer skills being required to operate such a vehicle. Whilst HGV drivers much obtain a professional driving qualification, known formally as the Driver Certificate of Professional Competence (CPC), the standard UK driving licence (more specifically category B) means you can drive any van type as long as it weighs less than 3,500kg. With a salary of up to £35,000 per annum, HGV drivers also cost more making lower paid van drivers a much more cost effective prospect. Even for businesses looking to operate HGV fleets, the long running shortage is making HGV drivers an endangered species industry wide.

The future of HGVs

With the 600,000 licensed HGV drivers currently registered within the UK having an average age of 57 and wandering closer to retirement, the driver shortage crisis is set to continue, which means more and more business owners will be looking for more viable alternatives in order to get their goods from A to B. The flexibility offered by fleets of vans is another key reason why the future of HGVs may not be looking so bright, and industry experts expect the van favouring trend to continue as a result, despite the inefficiency that will be encountered in terms of load capacity.